Fake it til you make it. Really?

I was talking about the imposter syndrome to a group at Victoria University in Wellington, New Zealand recently. One of the questions that came up was should you fake it till you make it?

Now while it’s a catc 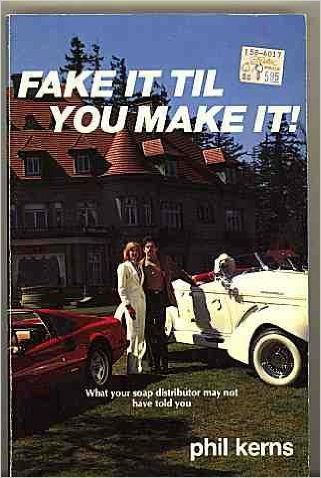 hy phrase I’ve always had trouble with fake it til you make it. I have two problems with it.

The first is the word fake. This phrase is giving people permission to be fake. It’s saying go out there and be a fake. Pretend you are something that you are not. Surely there are enough conmen and frauds in the world without encouraging more. Do you want to go to a doctor who is faking it till she makes it? Do you want to get on a plane with a pilot who appears very confident but has no flying ability? Do you want to hire a new staff member who has faked their CV while they wait to make it? Faking has bad connotations for me and so I find it hard to use the phrase.

Til you make it

And the second issue with the phrase is til you make it. This implies that after a certain period of faking you will make it. But my experience of working with people is that you don’t make it. Once you fake your way through this challenge the bar just gets higher. You tell yourself “I fooled them this time, but now they’re going to expect me to do this well every time. Or worse, they’ll expect me to do even better the next time”. And since you’re not that sure that you can meet this standard you need to fake more. In fact it becomes a cycle, – the imposter cycle.

So if I don’t like faking it til I make it what do I offer instead. Two things:

Work to get the skills you need

If you want to be a brain surgeon or a pilot or a plumber faking it til you make it is not a great strategy. You can’t fake skills you don’t have. If the job or task you are undertaking requires specific skills then go off and learn those skills.

Be brave and take action

Origin of the Phrase

The phrase, Fake it til you make it has an interesting history. It was, and is, used by the Amway corporation. In fact, it became the title of a book written by Phil Kerns in 1982 where he described some of the techniques used in Amway.

It is also popular in Alcoholics Anonymous groups although it is not part of their official approach. And, of course, it is used endlessly in business, sales and the self-improvement industry.

This entry was posted in imposter syndrome. Bookmark the permalink.